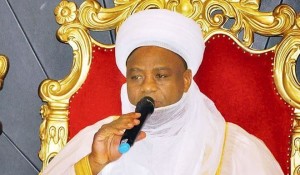 The Sultan of Sokoto and President General of Supreme Council of Islamic for Islamic Affairs in Nigeria, Alhaji Saad Abubakar has stressed the need for all Muslim ummah to take advantage of the ongoing Continues Voter Registration CVR to obtained a voters card ahead of the 2019 General elections. Speaking at the closing ceremony of the 32nd edtion of the National Quranic Recitation Competition holding in Katsina, Saad said it is only by doing this that one can have a say as to who becomes what and when.

According to him, the Muslim population is mass and it is those with cards are eligible to vote. He said one can only actively participate with having a voters card noting that it is high time the Muslim ummah realised the need for it adding that ‎’  let’s get our voters card because it is with it  that we can seek for our rights with our votes.

All Muslims to seek their cards to enable us vote, People will come seek for votes and we shall then tell then what we need of them’    He enjoined leaders to fear God and the followers as well and should always pray so that we forged ahead in this trying period of our times adding that leaders must redouble effort to boost peaceful coexistence in various places. In his remarks, the state governor Aminu Masari said the scourge of Almajiri education must be holistically looked at by all stakeholders giving the increasing misuse and social vices of system.

About 360 participants took part from 32 states and FCT in the 8 days event. Amina Aliyu Mohd from  Borno state and Amiru Yunus Guru from Bauchi state emerging as the overall winners carting home brand new cars, Hajj seats and other cash donations. Gombe state was announced as winner of the h