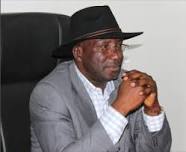 The Chairman of  Peoples Democratic Party (PDP), Rivers State, Chief Felix Obuah has recounted that six out of the 17 victims who were massacred on newhat years day were his relatives.
Speaking through his media aide, Pastor Jerry Needam on Wednesday, the party boss expressed sadness at the incident and discribed the killings as barbaric, unfortunate, callous and a monumental loss.
He said: “I lost six persons to the January 1 killings in Omoku, including my in-law, Augustine Ordu, three children and two other relatives.
“The killings can best be described as barbarism displayed by callous killers, who gunned down defenceless people returning from church.
“This is sacrilegious and unacceptable. We cannot allow this to continue in Omoku and its environs. Security agencies should ensure that perpetrators of this heinous crime are arrested and prosecuted.”
Obuah also commended the governor for his interventon, as well as commiserated with other relatives of victims of the violence.