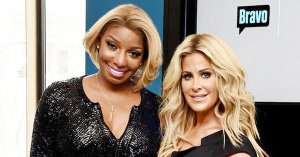 Nene leaks and Co star Kim Zolciak from the tv reality show, the real housewife of Atlanta has finally reached a boiling point.
The two ladies have recently been changing banters on social media, this is coming a month before the premier of the 10th season of the programme.
NeNe allegedly called her co-star and her daughter Brielle Biermann “racist” after the latter posted on Snapchat a video that appears to mock the cleanliness of NeNe’s home. The footage was taken during a party at the cast member’s house and shows Brielle appearing disgusted by a large black insect that appears to be an ant crawling in a bathroom.
NeNe in return reposted Brielle’s video on her Instagram, writing, “@briellebiermann We don’t have roaches! If you found 1, u brought it with u or it fell outta yo funky p—y! Please know I will get You all the way together when you start f–king wit me and mine!”
“Go somewhere and let the air outta those fake lips, fake t-tties and fake ass,” she continued, then called Kim “trashy.”
“My home is Brand New but you guys were so jealous of it, you couldn’t even give a compliment,” NeNe wrote. “You had to stoop so low and be so disgusting #racisttrash #jealous #KKK #thirsty you better run yo ass back to a child’s place #youwannaactgrown?”
NeNe had alluded to the insect video on Wednesday, writing in a cryptic post, “On the way back to the A, I fell asleep thinking about how imma live in my ROACH infested brand new home,” she shared. “#jealousprejudicebitch #disgusting #howlowwillyougo #ohithoughtyoudidntseeme #pottymouthtrashychildren #learnedbehavior #donteverspeaktome #thisiswhyiwouldntdoashowwithyou #youwillneverwinthis #blackpeopleneedtostopsupportingtheprejudice.”
“This started because apparently Nene was talking negatively about Kim on the cast trip and it got back to Kim,” a source had told E! News. “They’ve had this video with roaches in it and because of what they’d heard about the cast trip, Brielle released it.”
Brielle responded to NeNe’s post in a now-deleted comment on her own Instagram.
“I’m not calling BLACK people roaches!” she wrote. “I found a roach in NENEs home! not calling her a roach dumb f—. doesn’t matter if you’re black, white, hispanic, asian etc you can still have roaches in ur house if u don’t f—ing clean ur s—!!! #callorkinpls.”
Her mom then weighed in.
“First off that video is a combination of 2 videos! I COMBINED THEM!” Kim wrote on her page. “Brielle posted the first video on snap unaware of the large bug in front of her when she was kneeling down .. until her DM’s blew up! She removed the video immediately!! I was filming as an INVITED guest at @neneleakes for RHOA!! Brielle was invited as well! Brielle went to the bathroom and saw several bugs and had sent ME the video on snap and NO ONE ELSE!!!”
“We ARE filming a show, remember that, (RHOA) and Nene released this video herself!” she continued. “No one has EVER seen this video but RHOA! Nobody would have ever seen this video! Nene has said and done some things that are absolutely disgusting, however I will take the high road as you will see it on the show soon enough, but you WILL NOT make it seem as though my daughter did ANYTHING wrong! She never posted this video nor would she! As you see here I myself was not willing to send the video just for ratings for RHOA. END OF STORY.”