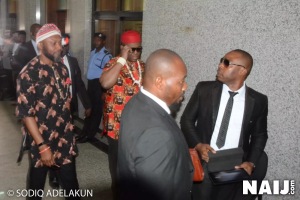 The Federal High Court sitting in Abuja has today gave orders to senator Enyinnaya Abaribe representing  Abia South, to give reasons why Nnamdi Kanu failed to appear in court. The senator along side two other who had sign for the bail conditions of the ipob leader were given alternative to either produce Nnamdi Kanu or forfeit their bail bonds of #100 million.

The court which was presided by Justice Binta Nyako gave the ruling on Tuesday, October 17, after Senator Abaribe applied to the court to discharge him from the suretyship, bond and recognizance of the bail of Kanu. Justice Nyako had ordered the senator to appear before the court to give reasons why the IPOB leader failed to appear for his trial. Kanu who was supposed to appear today for hearing did not show up.

Meanwhile the director of public prosecution, S. M Labaran said the state fears that the trial might not go on as planned, saying that,  the first defendant who was granted bail on August 25, on the grounds of medical challenge was not present in court.
More photos of the court can be seen below.