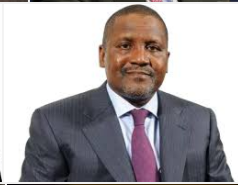 Stories emerging indicated that the Peoples Democratic Party (PDP) might be going for Africa’s most richest man Aliko Dangote as its 2019 presidential candidate as the party is already ma king pland to woo hI’m come 2019. According to sources this is in readiness to win the 20th presidential election which has already been zone to the north, while the national party chairman will come from the south.

“I can confidently tell you that the PDP has made overtures to Alhaji Aliko Dangote to come and fly the presidential flag of our party for the 2019 presidential election.” “So many things were taken into consideration before the party arrived at this decision. Alhaji Dangote has the clout, the pedigree, the name, the follower-ship and above all the financial war chest to match any presidential candidate that the governing All Progressives Congress (APC) or any other party may be bringing forward in 2019,” the source said.

The PDP’s interest came as a result of the previous support which the billionaire businessman has offer past presidential candidates.
A source said: “If Dangote can make financial contributions to ensure the emergence of other past Presidents in the country in the past, don’t you think he will be willing and ready to spend any amount to realise his own presidential ambition if he accepts the overture from the PDP?”

“This is one of the reasons why the PDP made the overtures to him (Dangote) and we sincerely hope and pray that he accepts it. If he does, the journey to the Aso Rock presidential villa for the PDP in 2019 would have been made less stressful and less thorny.”

However, another source who claim anonymity said it’s too early to make comments stressing that Dangote is never interested in politics.

The source said: “The attempt to woo him will fail because Dangote is not interested in politics. He is a businessman to the core and what you just asked me to react to is a distraction. “The PDP should go and look elsewhere for its candidate for 2019 as Dangote is committed to his core vision and desire to invest and create jobs to the people.”