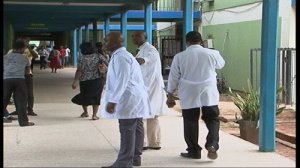 The Resident Doctors of Nigeria has announced the commencement of an indefinate strike action which theyve embacked upon on Monday morning. The strike action decision was made known by the National Association of Resident Doctors, NARD, President, Dr. Onyebueze John in Abuja.
The doctors were said to have rejected the Federal government offer to them after a meeting held.
The doctors had met about a week ago with The Minister of Labour and Employment, Senator Chris Ngige and the Minister of Health, Prof. Isaac Adewole with some representatives of NARD where the offers were made.
Disclosing that the offer from government was rejected, John said, “Rising from our NEC meeting, which started by 7pm yesterday and ended 3am today. NARD has resolved to reject the promissory offer from Government, and proceed on total and indefinite strike action until all items in her demand list for strike action are resolved by Government.”