A forex trader new to Lagos has narrated how Special Anti-Robbery Squad otherwise known as SARS officers, allegedly kidnapped him on his birthday and extorted the sum of 400,000 Naira from him.

Gilbert said it was his birthday so he chose to take himself out. However, on his way to Victoria Island, SARS officers allegedly stopped him and requested for his phone, asking what he does for a living then bundled him into their van after he answered their questions

The aggrieved man said he was taken to a location he’s not familiar with and was asked to withdraw 2 million Naira and pay to them. They threatened to take him to Panti if he doesn’t comply and no one would hear from him again.

He said they eventually agreed to collect 300,000 Naira and since he couldn’t withdraw the entire amount from his bank, he withdrew 298,000 Naira and gave it to them.

He shared a photo of one of the alleged officers involved and also screenshots of the transfer he made as proof.

He then tagged activists as he asked them to help him get justice. 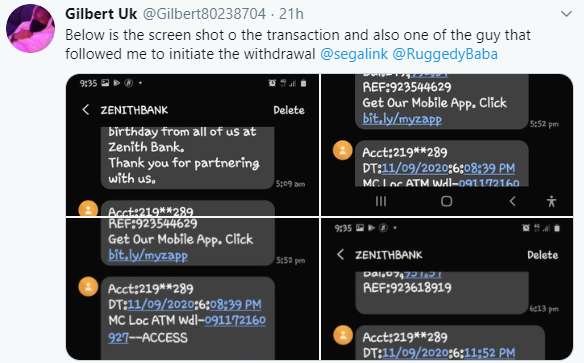