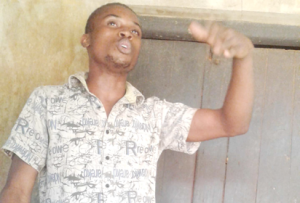 This development has however tiger ed the youths in the locality to burn down the Sabbath Church where Chiadi and his sister got married.  This type of marriege is discribed as a taboo in Igbo land, but chiadi said he read in the scripture were it was said you can marry your sibling.

Although chiadi did not give the specific scripture were his claim came from but stood his ground. Justifying his reason for marrying his sister, Chiadi said: “I am a Sabbath and, in searching through the scriptures, I discovered that one could marry his sibling. So, we went ahead with the arrangement to marry my younger sister.

“The marriage ceremony was observed inside our family compound, which also serves as a place of worship for us. My immediate elder brother, Paul Ezeibekwe, the pastor, was present during the ceremony.
“What happened is that when we decided to get married, we told our parents our intention and my father asked us if we knew what we were about to do. I told him that we searched through the scriptures and that God sanctioned it. It was after this that our parents consented.
“However, our other relations objected to the idea when they learnt of the plan and when we ignored them and went ahead with the marriage, they and other villagers burnt the Sabbath Church where we used to worship because they thought it was in that place that we worship, not knowing that we have since abandoned the place and worship in our compound. The burning of the church does not mean anything to us.
“God told me to marry my sister and she also saw same vision. There are places in the Bible that support such marriage. Those in doubt should read Songs of Solomon Chapters 4 and 5 and 1st Corinthians Chapter 7.
“Since we took this decision, I have not felt anything unusual, or felt that I did anything wrong. In the school where I teach, many people ask me about it and I boldly refer them to the Bible”.