Emerging reports has indicated that a couple identified as Mr and Mrs Olu Samson and their three children were killed in the Kogi tanker explosion which occurred on Wednesday September 23.

Most of the victims of the explosion which occurred around 8.30am in the Felele area of Lokoja, along the Lokoja/Abuja Highway, we’re said to be school children and students of the state -owned Polytechnic located a short distance away from the scene.

According to reports, the fuel laden tanker belonging to the Nigerian National Petroleum Corporation (NNPC) suffered brake failure, rammed into five cars, two motorcycles and three tricycles, as it hurtled down the road, killing the occupants before bursting into flames.

The couple was said to be dealing in sewing machines and other tailoring materials at Borehole cantonment in Felele.

According to reports, Samson wanted to drop off his children at school as had become his daily routine before opening his shop.

The couple were on their way to drop off the kids at school when the incident happened. Confirming the report, one Winsome Rufus took to Facebook to mourn the family.

An entire Family Was Wipe Off From The Surface Of The Earth.”

Meanwhile, it was also gathered that a man from Okene allegedly lost his six children in the explosion. 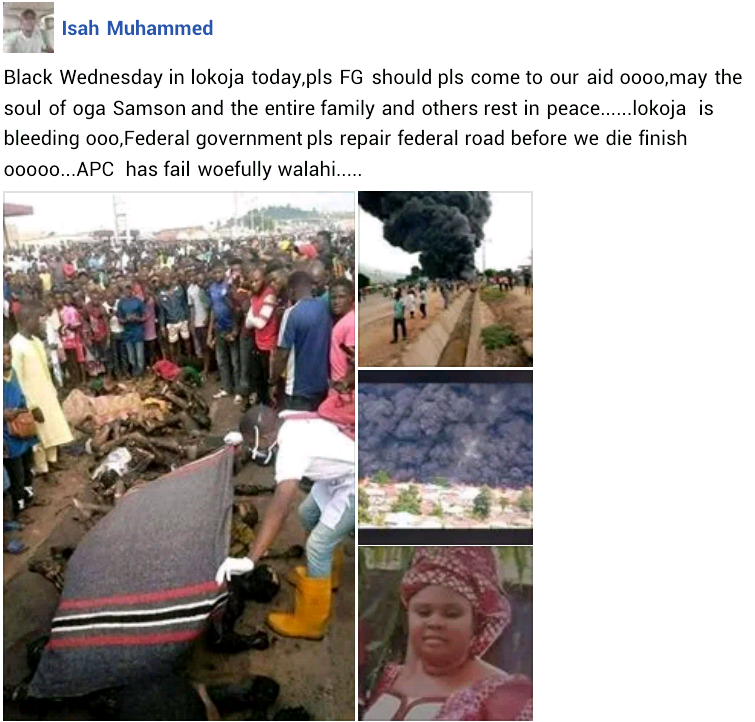