A former captain of the Nigeria Scrabble national team, Paul Sodje, has died after he was reportedly abducted by suspected herdsmen in Ondo State.

The Chairman of the Nigeria Scrabble Federation, Publicity Committee, Akintunde Akinsemola, who confirmed this to Punch newspaper said the late Sodje’s body was found inside the bush in Idoani, Ose Local Government Area of Ondo State on Tuesday, September 1.

According to Akinsemola, Sodje had gone to the bush to give ransom money to some kidnappers who had abducted his brother, Chris, four days earlier.

“Chris was going for his uncle’s funeral in Okwagbe, Delta State on August 28, when he was kidnapped at Ifon, Ondo State. The Fulani men demanded N100m but later reduced it to N1m. His wife Flora and friends rallied round to raise the ransom.

Then his elder brother Paul and a friend took the ransom to them, yet the Fulani men murdered the two of them. Chris has not been found and the kidnappers have stopped communicating with the family.

Idoani elders led by Otunba Oladele Olapeju, who were searching for their kinsmen, who were also kidnapped, saw Paul Sodje’s body and that of the man that accompanied him to the herders rendezvous.

They took the bodies to the Federal Medical Centre, Owo” he said

The late Sodje, who would have been 55 on Wednesday, September 9, captained Nigeria to the African Scrabble Championship in Zambia, 2012.

His colleagues in the scrabble federation have taken to social media to mourn his death. 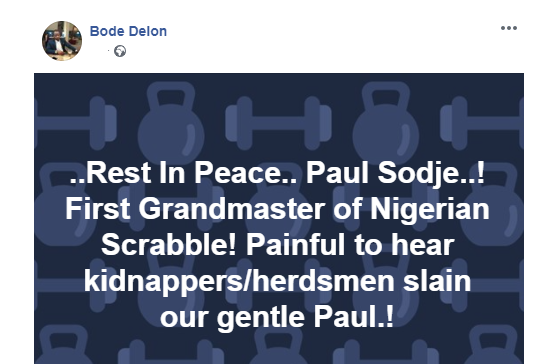 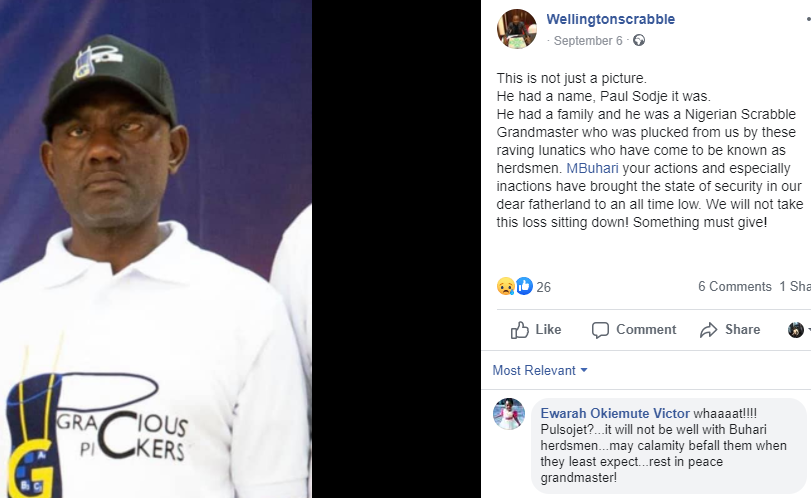