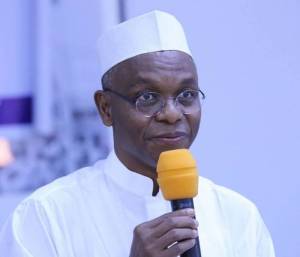 Following the just concluded rail inauguration in Kaduna by President Muhammadu Buhari, the war of words between Nasir el-Rufai, Kaduna state governor, and Ben Bruce, senator representing Bayelsa east, is not yet over.
Both men have been involved in arguments over some rail projects in Kaduna state.
Bruce had asked President Muhammadu Buhari to thank former President Goodluck Jonathan for the train ride he took in Kaduna when he inaugurated Nigeria’s first Inland Dry Port in the state.
However,  El-rrufai dismissed the senator’s claim, saying the administration of former President Olusegun Obasanjo ought to be given credit for the rail projects.
But the senator challenged him to a debate on the issue.
This has however prompt El-Rufai to dismiss the idea of a debate, while insisting that credit should be given to Obasanjo for the rail projects. Stating that while former president Obasanjo was developing this project, neither Jonathan nor Ben Murray Bruce were in the picture.
“There is nothing to debate. Facts cannot be debated. Opinions are free,” he wrote.
“While the Obasanjo administration was conceiving the rail modernization programme, Sen Ben-Bruce was organizing beauty contests and Jonathan was a deputy governor. I am not cluelessly common-sensical!”