A former Presidential aspirant, Adamu Garba has waded into the cryptocurrency controversy which was triggered by the Central Bank of Nigeria’s letter in which financial institutions were asked to close accounts “dealing in cryptocurrencies or facilitating payments for cryptocurrency”.

Garba Adamu had in his tweet alleged that many people have lost money through cryptocurrencies which he described as a “shortcut business”.

Better Investments! Those who might have lost their monies through a shortcut business called Crypto should learn to invest on real assets, like cows, which assured of huge returns on investment. Cow Ranching business is more lucrative than all cryptocurrencies combined. Lol. 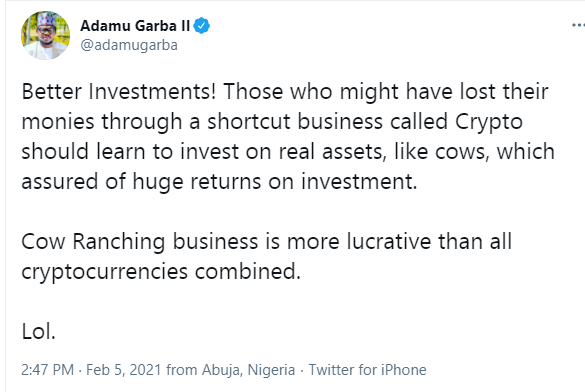