By Elizabeth Piper and Alastair Mcdonald 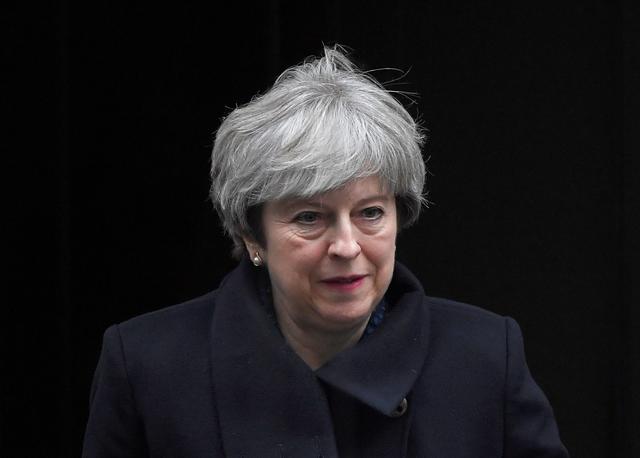 Britain’s Prime Minister Theresa May leaves 10 Downing Street in London, December 11, 2017.
REUTERS/TOBY MELVILLE
(Reuters) – British Prime Minister Theresa May will urge European Union leaders to approve an agreement to move Brexit talks on to a second phase on Thursday, describing it as a fair deal that offers a good base for a discussion of future ties.
At the beginning of a dinner in Brussels, 24 hours after an embarrassing parliamentary defeat at home, May will repeat her case for unlocking talks to unravel more than 40 years of union to allow for the discussion of future trade, which she sees as crucial to offering certainty for businesses.
The 27 other EU leaders are all but certain to approve the deal to move to ‘phase two’ on Friday, after May has left Brussels, launching a new stage of talks that could be hampered by divisions at home and differences with the EU.
“The prime minister will say that reaching the agreement on phase one has required give and take on both sides but a fair outcome has been achieved,” a senior government official told reporters.
After days of often fraught diplomacy, May rescued the initial deal last Friday, easing the concerns of her Northern Irish allies over the wording to protect a free border with EU member Ireland without separating the province from the UK.
ADVERTISEMENT
Then, EU negotiators said the talks had made “sufficient progress”, a recommendation that will, barring accidents, be blessed by the leaders of the other member states.
Her success has won her some respite at home from political infighting between enthusiasts and skeptics of Brexit in her ruling party, and has reduced the prospect of a disorderly departure from the bloc.
But there are hurdles still to come. May and her cabinet are due next Tuesday to hold a discussion of the senior ministers’ competing views on Britain’s future outside the EU – to remain close to the bloc or forge a new path.
The EU is willing to start talks next month on a roughly two-year transition period to ease Britain out after March 2019 but wants more detail from London on what it wants before it will open trade negotiations from March.
Pro-Brexit lawmakers are concerned by a fall-back promise in the initial deal to have “full regulatory alignment” with the EU if there is no overall agreement on future ties, and fear that their desire for an independent Britain is being undermined.
PARLIAMENTARY DEFEAT
In a blow to May, already weakened after losing her Conservative Party’s majority in a June election, parliament voted on Wednesday in favor of an amendment that requires a meaningful future parliamentary vote on any final Brexit deal.
Up until the last minute of an often bitter debate, May’s team tried to convince lawmakers in her party to block the measure, which the government fears will weaken its hand in Brexit negotiations. But enough conservatives rebelled to carry it narrowly by 309 votes to 305 in the 650-seat lower house.
“This defeat is a humiliating loss of authority for the government on the eve of the European Council meeting,” opposition Labour leader Jeremy Corbyn said in a statement.
“Theresa May has resisted democratic accountability. Her refusal to listen means she will now have to accept Parliament taking back control,” he said, co-opting a Brexit slogan

Divisions have split not only the governing Conservatives but Labour and the wider country — which voted narrowly for Brexit 18 months ago.
Before dinner on Thursday, May and her EU peers will discuss the bloc’s plan for closer defense cooperation with NATO Secretary-General Jens Stoltenberg. Long blocked by London, the plan now has backing from Britain, which as one of Europe’s main military powers, wants to keep ties with the EU on defense.
Over dinner, leaders will discuss their response to the migration crisis from Africa and the Middle East, and lingering deep divisions over how to share the load.
They will confirm a rollover of sanctions on Russia over the Ukraine crisis and are likely to reaffirm their opposition to U.S. President Donald Trump’s move to recognize Jerusalem as the capital of Israel.
(Writing by Elizabeth Piper; Editing by Peter Graff