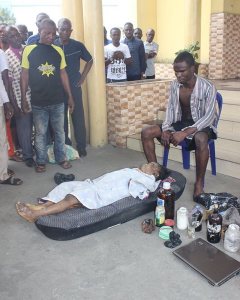 A 200 year old student of the university of porthacourt, Ifeanyi Dike has been arrested for allegedly killing  an 8 year old daughter of his uncle for money rituals.

The suspect was paraded by the police after he was cought with the body of the deceased. Ernest Nmezuwuba who is the father of the deceased who spoke to newsmen said he is filled with grief after seeing the mutullated body of his daughter.

Ernest narrated how the girl has gone missing and after a thorough search for four days without any luck decided to report the matter to the police.
He said he was later called by the police to come and see his daughter and that they have found her.

He said “I was wearing shorts when I received the call, and rush to the scene asking where is my daughter?  An they pointed to the sack,  I peeped and saw that her eyes were gone, one of her breasts was gone and the between her leg too (vagina) was gone. I turned and looked at the man who was responsible for my daughter’s kidnapped and I shouted hos name Dike!  I am from Odiagwa, Imo State he further stated.

The police Commissioner said they had cought Dike around 1:10am carrying a load, when asked he said he was going to throw it in the dustbin, and that was how they saw the corpes of the innocent girl whom he had killed for money ritual.